Like A Bullet Of Light... The Films Of Bob Dylan 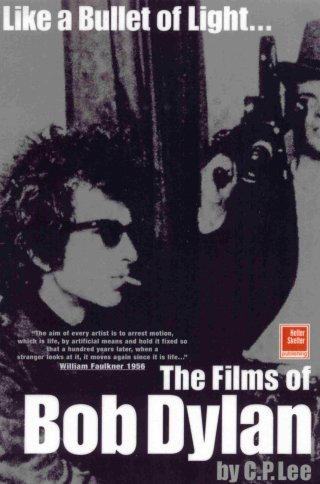 CP Lee’s follow up to his highly successful Like The Night – Bob Dylan And The Road To The Free Trade Hall, was published on April 7th, 2000 by Helter Skelter Books.

Like A Bullet of Light – The Films of Bob Dylan is an in-depth look at the relationship between Bob Dylan and the moving image, from his highly successful Dont Look Back (the missing apostrophe is deliberate), to the more intriguing foibles of videos such as Unbelievable.

Comprising archive research and critical analysis, this volume serves as much as a reference guide as a breakdown of his visual projects.

Mickey Jones, former member of Dylan's '66 touring band, and now Hollywood actor, has this to say about Like A Bullet of Light:

"After reading Like a Bullet of Light, there is no doubt that C. P. has done it again.  If you are a Bob Dylan fan then you already know and love Like The Night.  Now you can see C. P.'s insight to the film side of Bob Dylan.  As a member of The Hawks (The Band), I had the best seat in the house for Eat The Document.  Today I make my living as an actor and I do know film.  So does C. P. Lee.  C. P., thanks for getting it right."

"A fascinating look at Dylan's relationship to films and film-making"

"Oh no, not another Bob Dylan book, as a wiser man than I called his own volume on the mighty Zimm. But there's no need to groan this time, as Lee, with no little wit and grace , leads us through the often confused labyrinth of Bob's film career. Luckily Lee is that rare mix: a Bob fan, an academic and one time rock muso, gifted with a wry sense of humour - most useful while ploughing your way through the celluloid porridge that is Renaldo & Clara.

Lee does not judge or analyse, but presents and contextualises Dylan's 'roles', whether as documentary 'subject' (Dont Look Back), character actor (Pat Garrett & Billy The Kid), or Hollywood star (Hearts of Fire). There's no hot movie gossip, no big words, just an unfolding revelation of how Dylan the musician tries to mediate his art through the movies and gets tangled up in the art of others like Pennebaker and Peckinpah. As revealing about the process of film making as it is about Dylan, Like A Bullet of Light is a quiet little masterpiece all its own."

Don't forget to pick up C. P.'s other book on Bob Dylan - Like The Night - available from Helter Skelter, Amazon, Waterstones and all other good bookshops - a second edition will be published by Helter Skelter in late 2001