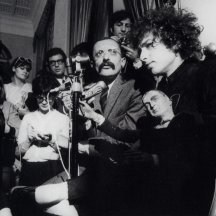 This page lists audio items that include interviews with Bob and other speech only material. Video items are on the relevant page of VHS & DVD. There must be many more items than these, and information (including colour scans where possible) will be very much welcomed.

Performances currently available on commercial CD are marked by

This promo stereo 2LP set with a 28-page illustrated book was distributed to attendees at the Columbia Records National Convention held in San Juan, Puerto Rico, 24 Jul 1968 - a "Lavish Celebration of the 20th Anniversary of the LP". The records come in white paper inner sleeves. The programme is narrated by Walter Cronkite and includes excerpts from The Times They Are A-Changin' and Like A Rolling Stone, as well as audio of Bob talking to a reporter from "Time" magazine from Don't Look Back, see VHS & DVD 1960s. The sides are ordered for auto-change record players, so that Record 1 (ANS 201) has  "Side 1" and "Side 4" and Record 2 (ANS 202) has "Side 2" and "Side 3". For I Can Hear It Now: The Sixties, also narrated by Walter Cronkite, see 1970.

"Whats It All About?" - 7" radio station disc produced by Radio TRAV Atlanta, GA, for the Presbyterian Church USA in conjunction with Columbia Records, TRAV programmes 107/108 (USA), broadcast 1971:
This discs came in plain white sleeves, and each programme lasted about 5 mins.

Michel Pomarede has found a 1988 pirate copy of the Folkways album on eBay with information: "The folks that released this 1988 LP were responsible for some of then best looking and sounding bootlegs in the industry. They always did a fantastic job. They released mainly Beatles LP's on the NEMS Label, and Lennon LPs on the Bag Label, but were responsible for many more incredible pieces. Their most famous Dylan release is Ten Of Swords. The label name changed with every artist, and would always be a name associated with that artist. The sleeve and record labels of this title state the record company to be 'Broadside Records' (the label that originally released it)."

For a 2004 UK reissue of this material, see below.

Thanks to Alan Hoaksey for information that the Dylan interview used here is not the San Francisco 1965 interview as originally thought, but the "religious" interview with Pat Crosby recorded in Pittsburgh, PA, for KDKA-TV, 15 May 1980 and broadcast the same day. More excerpts from this interview (Bob's responses only) can be seen in the 2006 unauthorised Highway 61 Entertainment/MVD USA video Bob Dylan 1975-1981: Rolling Thunder and The Gospel Years, see Honourable Mentions - Video.

According to the UK "Record Collector" magazine, counterfeit copies exist of this album, and can be identified because the matrix numbers on the record centre are handwritten. However, my copy was bought from a reputable source and has handwritten matrix numbers: Side 1 - XSM-168271 1D F4, Side 2 - XSM-168272 1E F5. Both sides also have "MASTERED BY CAPITOL" stamped in the vinyl.

Thanks to Hans Seegers and Truman Peyote for scans and additional information.

Hour 1: Talkin' New York; Blowin' In The Wind; Song To Woody; The Times They Are A-Changin'; Masters Of War; All I Really Want To Do; Maggies Farm; Subterranean Homesick Blues; Positively 4th St.

The text of the complete 1984 Derek Bailey interview appeared in "The Telegraph #18" and is included in "Wanted Man: In Search of Bob Dylan" by John Bauldie (Penguin paperback edition, 1992, pages 46-48), but not the hardback edition of this book (Black Spring Press, 1990). The Penguin paperback edition must be compiled from two earlier hardbacks. An abridged version appears in "All Across The Telegraph: A Bob Dylan Handbook" by Michael Gray and John Bauldie (Sidgwick & Jackson, 1987, page 20).

Thanks to Freddy Ordoñez Araque, Alan Hoaksey, Manfred Helfert and Jack from Canada for information and pictures.

These LPs, total time: 61:44 (including local ads), contain the 1981 London interview with Bob Dylan plus 12 songs, all album versions, although all are incomplete. The programme is contained on three sides of the LPs - the second side of the second record is blank!

All tracks are partly talked over.

"US Tour Press Conference 1986" - CD in box/LP picture disc, Hearts Of Fire Records (UK), 1986:
The CD itself has a black and white 1986 picture of Bob (not very easy to see in the picture) and is #0520 of a limited edition of 1000. The box also contains two colour photographs of Bob from 1986 - one the colour version of the one used for the box cover and CD inserts, and one with Tom Petty.

Information and scans from Manfred Helfert. Thanks to Paul Read for information about the picture disc and David O'Brien for scans. Claire Simmons has a copy of the picture disc entitled "Sydney Press Conference" with the 10 Apr 1986 conference on Side 1, running time listed as 18:30. The Hearts Of Fire conference is on Side 2.

There is also a clip from an interview, where Bob says: "The record business has changed because see when I went in in a what they call I guess what they call the early days it was in the sixties really. Everybody made records the same as I did no matter who, Beatles, Rolling Stones, The Animals, The Byrds and you were a group you were a somebody before you went in and made the record you were a somebody, now people don't want to pay dues no more."

Thanks to Kenneth Robson for information and scans. Thanks to Alan Hoaksey for identifying this as being from the 1981 Dave Herman interview.

Thanks to John Gaylor, Ulf Gyllenspetz, Dan Jordan and Jack from Canada for information and scans.

The first of these radio station discs has a cue sheet dated 27 Jun 1994, and the broadcast dates on the other sheets and all three CDs are for July 1994, so these programmes were aired before the 1994 Woodstock Festival took place. This explains why they contain excerpts of Dylan album tracks and previous interviews. CDs 1, 5 and 6 had no Dylan content.

CD2 (week of 10 Jul 1994) includes excerpts of Like A Rolling Stone from Highway 61 Revisited and Positively 4th Street from Greatest Hits. It also includes an interview with Bob about performing on stage.

CD3 (week of 17 Jul 1994) includes excerpts of I Want You from Blonde on Blonde and Positively 4th Street from Greatest Hits. It also includes an Interview with Bob.

CD4 (week of 24 Jul 1994) includes excerpts of I Want You and Rainy Day Women #12 & 35 from Blonde on Blonde. This disc does not include an interview with Bob, but does include interviews with Steve Cropper and George Harrison talking about Bob.

I have not allocated R-numbers to these excerpts.

Thanks to Jack from Canada for information scans.

Various Artists - "Strange Brew - Songs Of Inspiration: A Tribute To Brett Whiteley" - 2CD set in digipak, Columbia 481538 2 (Australia), 1995:
This 2CD set in a digipak with an attractive booklet is a tribute to Australian artist Brett Whiteley, who died on 15 Jun 1992. It has now been deleted.

Thanks to Peter Oudejans for information and scans.

"The Classic Interviews 1965-1966" - Chrome Dreams CIS 2004 (UK), Apr 2003:
This CD was released in association with the Dylan fan magazine "Isis" and has a 16 page booklet. The CD itself is designed to look like a tape spool, as is the reverse of the rear insert seen through the clear plastic tray.

R-0608 is complete: excepts from this interview (all listed as R-0506) were used in these video documentaries:

Thanks to Peter Gilmer for information about this item, who says: "This double CD is from Random House Audio, RHCD 432.  Once again, it's a less than exciting Geoffrey Giuliano piece.  It includes lengthy excerpts from the San Francisco 1965 press conference (of course) and, I think, the Los Angeles press conference from the same year (I'll check that soon) and the Rome 2001 press interview.  There's also a large chunk of the Klas Burling interview from Sweden, 1966 and a short extract from Dylan's Grammy acceptance speech where he talked about seeing Buddy Holly in the Duluth Armory.  Also, it contains two very short excerpts from very early interviews that I'm not familiar with at the moment.  I'll track them down, hopefully.  The back of the CD includes the following sentence: "He has toured the country as a member of The Travelling Wilburys, joining with rock icons Tom Petty, George Harrison and Roy Orbison."  I must've missed that!"

(Peter is quite right - no Travelling Wilburys tour ever took place!) Also thanks to Rob Cole for the scans.

R-0608 is the complete Los Angeles interview, excepts from this interview (all listed as R-0506) were used in these video documentaries:

"The Classic Interviews Vol. 2 - The Weberman Tapes" - Chrome Dreams CIS 2005 (UK), 26 Jan 2004:
This CD was again released in association with the Dylan fan magazine "Isis". It includes a 16-page booklet with a current article by A J Weberman, and a rare cover photo by Elliott Landy. The little girl with Bob is probably Maria, Sara Dylan's daughter by Hans Lownds. Bob's daughter Anna was several years younger.

The CD is a jewel case with a transparent tray, inside a slipcase with a booklet. The front and back covers of the slipcase and the booklet are the same as the front and rear inserts. For the original 1977 release of this material by Folkways, see above.

Thanks to John Caruth for information about this item.

Thanks to Jean-Pierre Mercier for the information that the CD has 14 tracks:

The story that this CD would also contain a previously unreleased Dylan performance was wishful thinking.


Thanks to Ian Woodward for information about the contents:

Thanks to Rob Carson, Alan Hoaksey and Jack from Canada for information and scans.

As it contains musical performances, this CD-R is also listed in 2011.

Thanks to Tim Dunn for information and to Jeff Friedman for the scan.

Thanks to Tim Dunn and Jack from Canada for information and scans.

Previously released on CD on the Smithsonian Folkways album There Is No Eye: Music For Photographs, Nov 2001, accompanying a book of photographs "There Is No Eye" by John Cohen (of the New Lost City Ramblers), see 2001

Tim Dunn's copy cuts off during R-0908, so I missed R-0922 off this original listing, which is why it has a later R-number. Larry Crum had a similar copy, but emailed Pacifica and they sent a replacement with the full interview. The 2010 Left Field Media UK release has the interview in full, see Questionable Releases.

Joe Smith - "Off The Record: An Oral History Of Popular Music" - Library of Congress Recordings (USA), 2012:

Track 2: Dylans Xmas Album  Sean Wilentz (11 Nov 2009). Includes fragments of these songs from Christmas In The Heart: Here Comes Santa Claus; Ill Be Home For Christmas; Must Be Santa; Winter Wonderland; O Little Town Of Bethlehem; and Have Yourself A Merry Little Christmas

Track 2: Writings On Dylan  Greil Marcus (24 Nov 2010). Includes fragments of With God On Our Side (The Bootleg Series Vol. 6 - Live 1964), Like A Rolling Stone (Best Of The Original Mono Recordings)

Track 4: Dylan biographer Howard Sounes (16 Jun 2001). Includes fragments of The Lonesome Death Of Hattie Carroll (The Times They Are A-Changin), Like A Rolling Stone (The Bootleg Series Vol. 4 - Live 1966), This Wheels On Fire (The Basement Tapes), Gotta Serve Somebody (Slow Train Coming), Things Have Changed (The Wonder Boys: Music From The Motion Picture)

Thanks to Tim Dunn for information.

Thanks to Tim Dunn for information.

Listings © 1998-2022
The rights to material from all quoted contributors remain with them. Copyright of all included artwork remains with the various record companies and artists.

The previous Web Counter has now been discontinued. There have been around 12 million visits since mid-1998. New statistics from end Jun 2022 are here.