The "Blonde On Blonde" Missing Pictures

This page shows the pictures on the gatefold sleeve of the vinyl release of 1966s Blonde On Blonde that have not made it into the regular CD insert (the artwork for the gold CD is different as shown below). If you know who any of these people are, please contact me or make a posting to my Facebook page. The inside layout was revised in the USA from 1968 onwards to remove the picture of Claudia Cardinale, but printings outside the USA preserved the original layout. Both the 2002 re-release of the US mono mix of Blonde On Blonde by Sundazed and the 2010 re-release of the mono set by Columbia/Legacy/Sony Music use the 7-photo picture shown above, they have not managed to get permission to reproduce the original sleeve. For more details see International Mono Releases.

Thanks to photographer Jerrold "Jerry" Schatzberg, his assistant Tim White, Charlie Steiner, and Rod MacBeath for their input to this page. Thanks to Hervé from France for the two Jerry Schatzberg books cited here. Thanks to Bob Egan for his work in tracking down the New York locations used by Jerry in the photoshoot, for more details see

. About the fold-out picture on the front, Jerry says: "I wanted to find an interesting location out of the studio. We went to the west side, where the Chelsea Art galleries are now. At the time it was the meat-packing district of New York and I liked the look of it. It was freezing and I was very cold. The frame he chose for the cover is blurred and out of focus. Of course everyone was trying to interpret the meaning, saying it must represent getting high or an LSD trip. It was none of the above; we were just cold and the two of us were shivering. There were other images that were sharp and in focus, but to his credit, Dylan liked that photograph." 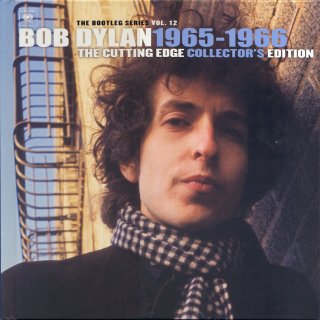 This second picture appeared for years in the regular CD insert in a cropped form only, omitting Bob’s companion. Rod MacBeath, in his "Telegraph 50" article, "Looking Up Dylan's Sleeves", identifies the person as Albert Grossman, but Jerry Schatzberg says: "The photograph that identifies Albert Grossman as the second figure, is incorrect, it is (Lady) Sandra Suffolk. She contacted me with the pretext of a photo shoot for "Queen" magazine. She really wanted an interview with Dylan. I spoke to him and he agreed to meet with her if I would come along. I did, it was just the three of us." No interview with Bob by her was ever published in "Queen" magazine or anywhere else.

In an interview with FAQ Magazine in 2013 Jerry said "I once had a woman from the UK who wanted to interview him and she came to me on the mere pretence that the editor of Queen magazine wanted me to photograph her. And I did it, and while I was taking the pictures, we talked about her. She told me that she had just done an interview with Marlon Brando and so on, and then she said, You know Bob Dylan, right? Can you get me an interview with him? I said, Oh, I dont know. But then I told him the whole story, and I said, Its up to you, do you want to do the interview? He said, Okay, Ill do it, but youve got to come along. And I said, Yeah, Ill come along. So we went to Dakota to do the interview and the first question was, Well, now that youre famous, how much money do you want to make? And he said, All of it. And the whole interview went like that. She asked him, Do you believe in nature? And Bob would say, No, I dont believe in any drugs. I would love to find that interview; maybe it still exists somewhere, maybe it was never even published. In the end, it turned out she was a real con artist. Her father was a munitions man and he would follow her all over the world to pay off her debts. She was also living in a friends apartment at that time, but she didnt have any money, so she sold the paintings from that apartment. She was a real number."

Sandra Paul's father was an RAF doctor, not the "munitions man" Jerry remembers. The real Lord Suffolk (the 21st Earl, born 1935) is also called Michael Howard, which may explain the mix-up. He has been married three times, but in the 1960s he was married to Simone Litman, not a Sandra. So - the identity of "Lady Sandra Suffolk" remains a mystery!

Some interesting comments from Tim White: "My name is Tim White and I was working with Jerry Schatzberg when the shots of Dylan you are curious about were taken! I can confirm that the girl is definitely not Edie Sedgwick. We photographed her several times with Andy, she was definitely blonde at the time. I remember that the guy you are concerned about [Albert Grossman - see above] was quite tall, if I'm right, had steel rimmed round glasses and may have been Bob's record producer. I think he would have been about 45-55, it was a long time back! Jerry was about 38 at the time, the studio was 1st. Floor, 333 Park Avenue South. I was also present when the cover was shot. I remember going to the location with Jerry in Bob's Mustang! I also did all Jerry's black and white printing. I remember printing the shot with the painting and the pliers and I pretty certainly made the print of the guy with his back to us. I suspect that the shot of Bob with the girl may have been taken by Jerry at Ondine which was a night club that Jerry owned but I cannot remember." Jerry confirms this, apart from the fact that his studio was on the 3rd floor, not the 1st. Thanks to Jerry Schatzberg and Tricia Jungwirth for information about Jerry's large-format limited edition book of Dylan photographs called "Thin Wild Mercury: Touching Dylan's Edge", published by Genesis Publications Ltd in 2006.

In July 2013 I received two email messages from Joan Carra claiming she is the girl with the headband, which may be true as there's been no confirmation yet that the girl is indeed Carole Adler.

Page 66 of the book shown on right above is called "Bob Dylan Party at Ondine", taken at the nightclub on 5 Oct 1965. This page shows a wider version of the picture from which the shot on the album was cropped and some proof sheet frames. The screen shot above right of Bob at Ondine on 5 Oct 1965 is from the Genesis Publications web-site. For more information see here:

As well as having possibly inspired Like A Rolling Stone (the story in the song is very much Edie's, and Andy Warhol was accused of being the diplomat in the chrome horse with the Siamese cat), allusions to Edie are said to be found in both Just Like A Woman and Leopard-Skin Pill-Box Hat. Clinton Heylin even supposes that She's Your Lover Now might (his italics) be about Bob, Edie and Bob Neuwirth. See Mono 7" Singles: 1965 - Like A Rolling Stone for more information.

I'd previously thought all the pictures on the inner sleeve were taken by Jerry Schatzberg, but "Scott" informs me that this picture of Bob live in 1966 at bottom left was taken by Charlie Steiner (© 1966), and Charlie himself confirms this and that it was at the Academy of Music in Philadelphia, PA, on 24 or 25 Feb 1966. To see the complete image, visit

("Highway '67 Revisited"). Thanks to Ian Woodward for his convincing arguments that this was taken on the 24th rather than the 25th!

Stuck Inside Of Mobile With "Thee"

The title of the song "Stuck Inside Of Mobile With The Memphis Blues Again" was incorrectly printed on the first US printing of this album as "STUCK INSIDE OF MOBILE WITH THE" (later replaced by just "MEMPHIS BLUES AGAIN"). When the album reached the UK, the typesetter realised this was a mistake and (obviously without checking it out) "corrected" it as shown below. The mistake is repeated on the record label. Thanks to Carsten Wohlfeld for pointing out that the "Millennium Edition" of Blonde On Blonde was issued in a double card CD sleeve reproducing the original UK artwork, and therefore repeated this mistake!

Al and "Blonde On Blonde"

Listings © 1998-2021
The rights to material from all quoted contributors remain with them. Copyright of all included artwork remains with the various record companies.